REFILL partners meet in Ostrava with Marek Pokorný, the director of PLATO, a platform for contemporary art.

The mission of PLATO Ostrava is to provide a wide spectrum of information on contemporary art and its subjects, as well as to enhance the discussion on the character, impact, forms and possibilities of contemporary art.

PLATO has moved recently in an empty textile shop. The shop is an intermezzo between renting a huge space in the old gasholder in Ostrava and their future home. The city has bought an old slaughterhouse which is foreseen to be the new accommodation of this art gallery. Because of the length of renovation of this 19th century building, it became clear that PLATO needed a temporary home in the meantime. The DIY Bauhaus store, just in front of the slaughterhouse, was the solution, but there were many construction and safety problems. Another solution was found in an old textile shop, empty for more than 4 years, and offered by the district. 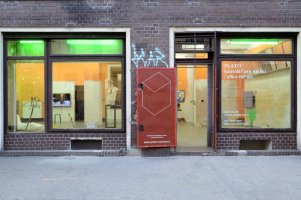 Marek, the director says that in fact an art gallery could work as a Nomad, because space is not important for an art gallery, it is how art can interact with the people.

Nevertheless, the city cannot imagine an art gallery without a space, so they provided the old textile shop, which is a totally different and limited space then the art gallery is used to.

PLATO discovered that this temporary use in the shop, has brought them a gift and a new experience. First of all the space is out of order and out of any framework, which makes it suddenly interesting for art. Because of the limited space, PLATO had to change their program in more innovative exhibition projects. The plan is to organize more workshops, debates, lectures, … . A symbiosis of 2 roles was born, PLATO became an office and an art gallery. This experience helped PLATO in a new direction, they will organize new activities, and build new projects, ideas and institutional habits into in their future home.