During our Transnational Meeting in Ostrava, Czechia, we meet with Marta Pilarova, founding member and director of Provoz Hlubina. The site consists of 5 historical black coal mine buildings reactivated as a quarter for artists, creative people and cultural institutions. At the centre, there is the building with accomodation for a wide range of artistic initiatives: music studios, cinema screens, film center, recording studios, concerts, workshops, … and 17 ateliers for temporary use by artists. Opposite is the former bath house of the coal mine workers, existing of a music hall and a dance hall for bigger events. Around the corner we went to see the former machine hall, which has now been converted into a climbing hall. A last hall will be opening shortly as a meeting and workshop place for different forms of craftship f.i. ceramic, 3D-printing, Arduino, … 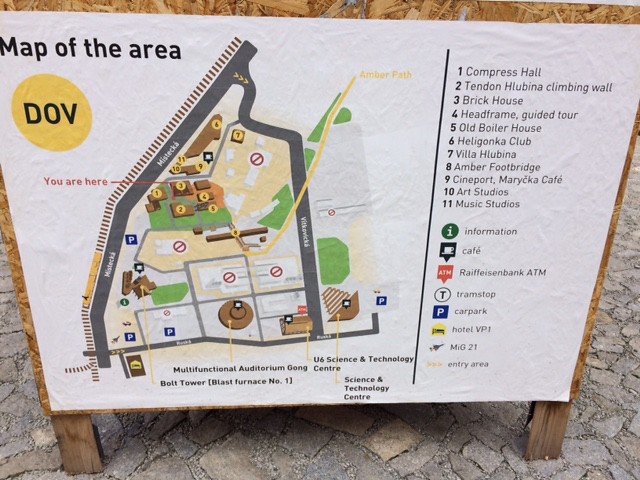 Hlubina is funded by the European Union (Cultural Heritage) and the city of Ostrava. The recovery of the buildings was led by een public-private collaboration with the former steel and coal mine factory, the city of Ostrava and Hlubina as a non-profit organisation. The main objective of Hlubina is to revive industrial heritage, by offering a wide range of cultural activities and (non-formal) education.

One can discuss whether these these halls with permanently installed facilities should be considered as a ‘temporary use’. Marta puts it as follows: ‘Having buildings for permanent use doesn’t mean we gave up temporary use in Hlubina. We change our space continously. But our aim in general is to keep culture as a main topic in Hlubina permanently.’